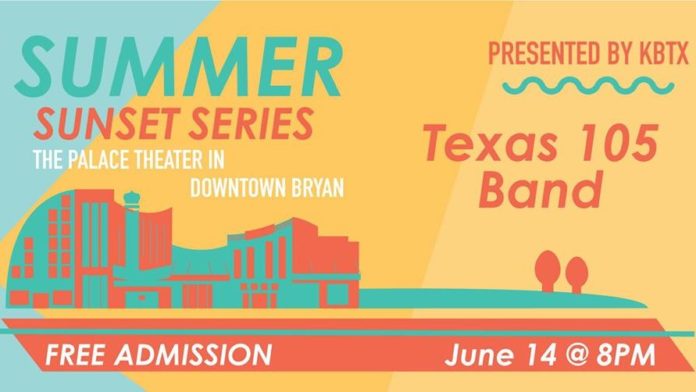 It’s not a Texas town without some boot-tapping country music, and Downtown Bryan doesn’t disappoint! So break out your boots and shimmy on over to the Palace Theater for a free concert!

The Texas 105 Band hails from Navasota, Texas, and has taken its music all over the state. They’re sure to get the crowd hooked with their audience interaction and lively music, spanning southern genres like Texas and classic country. They even play swing, blues, and some rock and roll. Anyone that calls Bryan home will definitely see they fit right in!

Can’t take the heat? Or maybe you just got comfortable in that recliner of yours? KBTX will feature each of the winning bands the same day as their performances on First News at Four during their Free Music Friday segment!

But for the first time ever, KBTX is partnering with the Downtown Bryan Association to bring these local bands right to its Brazos Valley viewers. So why not dust off those boots and see the Texas 105 band’s full show in person? Find out for yourself just what made them winners!

Texas 105 Band will take the stage at 8 p.m. on June 14. Gates open at 7:30. The coming second and fourth Fridays of June and July will feature performances from bands such as Great American Boxcar Chorus, Pardon Our Mess, and The Docs.

To find out more about The Summer Sunset Series, visit https://bit.ly/2IgAAdv