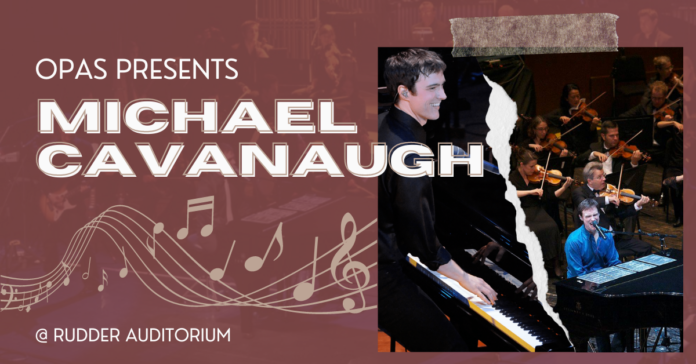 Live music is back! If you’re into rock music, you won’t want to miss this one-night-only performance by Grammy and Tony Award nominee Michael Cavanaugh. He and his band will take the stage and perform the greatest hits of Billy Joel and Elton John at Rudder Auditorium on Wednesday, Oct. 20, at 7:30 p.m.

Michael began playing piano at the age of seven and even started his first band at 10 years old. He continued with his love for music and got his big break when he was discovered by Billy Joel. The two worked together, along with Twyla Tharp, to create the Broadway Musical “Movin’ Out.” Cavanaugh was cast as the lead in the musical, and his performance with the role caused him to receive both Tony and Grammy award nominations. Following his time on Broadway, Cavanaugh began touring, creating a show that allows him to put his own spin on modern pop rock while also putting out music of his own. In 2017, he released his second commercial album, “The Way I Hear It,” which debuted at number 17 on the Billboard Heatseekers chart. Now, he continues to tour his many symphony productions.

The College Station performance kicks off MSC OPAS’ 49th season. It’s a super exciting time because this is OPAS’ first show in over 20 months! Don’t miss out on an evening that’s sure to rock Rudder! Tickets are on sale now at the MSC Box Office and prices range from $20 to $70.