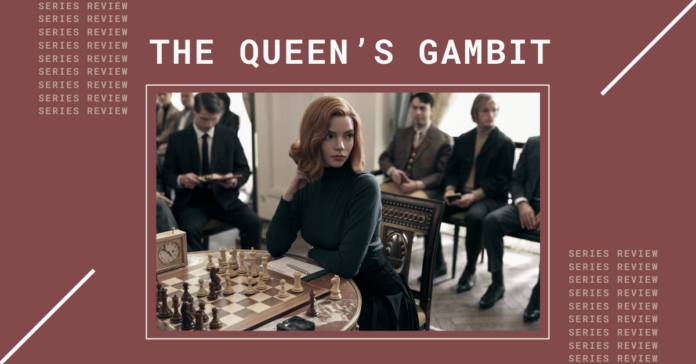 Ah, chess. The age-old game that everyone wishes they could play, but no one commits to learning. But could one of Netflix’s latest original series change that? Following the release of “The Queen’s Gambit,” sales of chess sets in the US jumped up 87%, following years of negative growth in the market.

Beth Harmon, (Anya Taylor-Joy) protagonist of “The Queen’s Gambit” and child chess prodigy, learns to play the game while living at an all-girls orphanage. She begins to imagine the chess board while lying awake at night, moving pieces and practicing gameplay from her memory. Netflix’s clever and eloquent special effects allow the viewer to see what the moving pieces and the board look like in Beth’s mind without being cheesy or unrealistic.

The seven-episode series follows Beth through adolescence into young adulthood as she becomes increasingly more impressive at the game of chess. An intellectual, quiet girl, Beth is shown spending most of her time reading books on chess openings and game strategies, and her sharp memory helps her prevail in matches, in spite of a difficult life and a serious drug addiction. Perhaps because of Beth’s dependency on drugs, we are completely swept into her journey, one could even say to an addictive level, as we root for this young woman to succeed in an intellectual world usually only populated by men.

On that journey, Beth interacts with many characters who are all somewhat flawed but each one ultimately ends up helping her get one step closer to achieving the perfection of the game. The dysfunctional relationships Beth shares between her adoptive mother and some of her chess companions lead you to expect that they will trigger Beth’s demise, yet you come around to almost all of them by the end of the series.

“The Queen’s Gambit” is a brooding, moody series full of complexities that bear much resemblance to the equally intricate game of chess as well as the goings-on of Beth Harmon’s mind. It spotlights the value of knowledge and champions a game not traditionally celebrated in our modern day, quite in contrast to the typical activities or events we usually prefer. It’s something new, something refreshing—and clearly a lot of the U.S. thought so, too. Hopefully their chess boards will become as worn as Beth Harmon’s.

The Queen’s Gambit Spurs Boom in Sales of Chess Sets