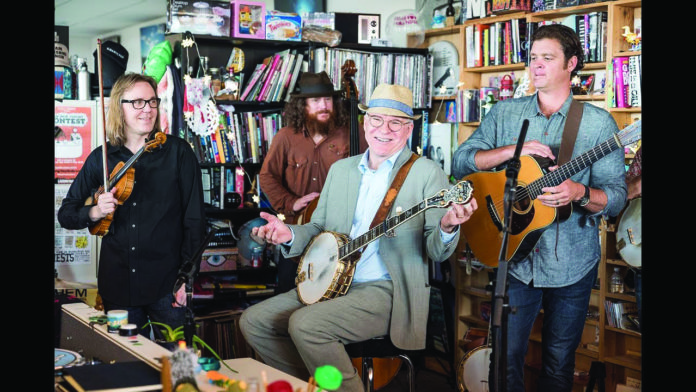 Grammy Award-winning band The Steep Canyon Rangers is set to play in College Station, and if you’re a fan of true blue American music at all, you won’t want to miss it. Known for its energetic shows and unique blend of bluegrass, folk rock, pop, and country, this talented group will take the stage at Rudder Theatre on Tuesday, February 4, at 7:30 p.m.

The band has roots in North Carolina, where three of the members, then-students at the University of North Carolina, started playing local gigs back in 2000. Things took off from there. The group first achieved recognition in 2006 when it was named the International Bluegrass Music Association’s Emerging Artist of the Year, and found ultimate success in 2013 when they received a Grammy Award for Best Bluegrass Album. The Rangers have released 11 studio albums, including “The Long Awaited Album” in 2017, a collaboration with actor, comedian, and renowned banjo player Steve Martin.

The College Station performance will be one of the group’s first of a months-long, international tour that will take the band to the United Kingdom and Ireland. Their star-power will be on full display when, at various stops along the way, they perform with Steve Martin, Old Crow Medicine Show, and Alison Kraus, all highly regarded artists in the Americana/Bluegrass scene.

The Steep Canyon Rangers just released their latest single, “California,” on January 10. The song, another collaboration with Steve Martin, showcases all facets of the group’s talents with mellifluous vocals, a catchy beat, excellent instrumentals and a meaningful story. The song has already received positive reviews. The group is also set to release a new album, “Be Still Moses,” on March 6