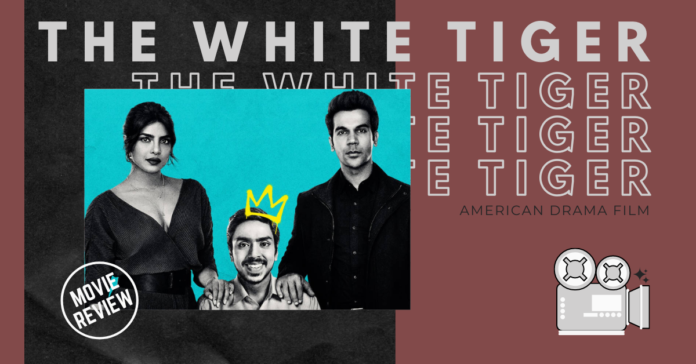 On Jan. 22, 2021, the Netflix original, “The White Tiger,” was released, and it has already hit the Top 10 on Netflix. The American drama film, directed by Ramin Bahrani, was adapted from Aravind Adiga’s 2008 novel “The White Tiger.” The film is filled with family drama, corrupt governments, alcohol, and bribe money. However, it brings to light the story of a man with aspirations to make something of himself, and it shows how he got there from being at the very bottom.

The main character and narrator, Balram Halwai (Adarsh Gourav), tells his story of rising from poverty to becoming a successful entrepreneur in India. In between his poor life and success, he becomes a private driver for The Stork family, specifically the son, Ashok (Rajikummar Rao), and his wife, Pinky (Priyanka Chopra-Jonas) who came to India from America.

The film took a bit to get into, which is expected for a movie that runs over two hours. However, once the narrator gets past introducing himself and his family, he begins talking about how corrupt his life was before becoming an ambitious man. The acting was very believable, and the characters were nicely developed in this movie. Some scenes could have been cut to make the film not as long. Present-day for Balram is 2010 in Bangalore, running a private driver company called “White Tiger Drivers.”

The film is rated R for language and some violent scenes. It’s a great movie to watch with your roommates, significant other, or a family with teenagers. This is your type of movie if you enjoy a mix of drama and action with slight humor added. The movie shows what the power of ambition can get you in life; no matter how difficult your childhood was, you can make something of yourself.

Overall, “The White Tiger” is inspiring in the sense of following your dreams, whether that be starting a business or trying to accomplish something your parents never had the opportunity to do.