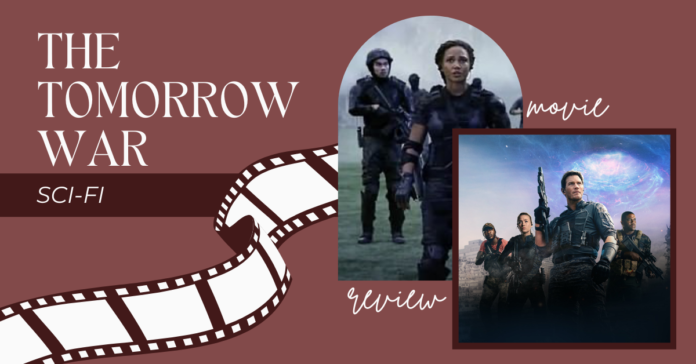 Science fiction movies are often known for some wild plots often revolving around technology and warfare, time travel, or aliens. But imagine a movie that combines all of that. “The Tomorrow War” is built on the concept that 30 years in the future, humanity needs help in a war against aliens.

And of course, Chris Pratt (playing Dan Forester), is going to come to the rescue. In this futuristic flick, we see a fearful world institute an international draft, sending soldiers and civilians like Dan to the future to help the war effort. In the future, Dan meets his daughter (Yvonne Strahovski) and we find out manufactured daddy issues run in the family. Of course, things don’t go quite according to plan, and our heroes end up in a mad dash to save Earth.

The action scenes in “The Tomorrow War” are phenomenal and really carry the movie when coupled with the fantastic casting. Don’t be fooled though, this movie landed in plenty of pitfalls.

First pitfall: it fluctuated abruptly from high action to overly melodramatic. The creators seem to have been trying to go for a more character-driven story, but a lot of the intercharacter conflict feels artificial. Especially when they ditch some of the characters they were building for extended periods. Second pitfall: not just melodramatic but emotionally conflicted. Hard to say if it was the directing or the acting, but in some scenes, it’s hard to see what emotion they were going for. Third pitfall: the movement between scenes often feels abrupt and unrealistic, not to mention the “plot twists” the audience can see coming from a mile away.

Yet despite the shortcomings, “The Tomorrow War” is fun, interesting, and well worth a watch for many Sci-Fi fans. As long as you’re not expecting a plot-perfect, completely believable movie—it’s easy enough to really enjoy. Especially for those looking for secret J.K. Simons inserts.