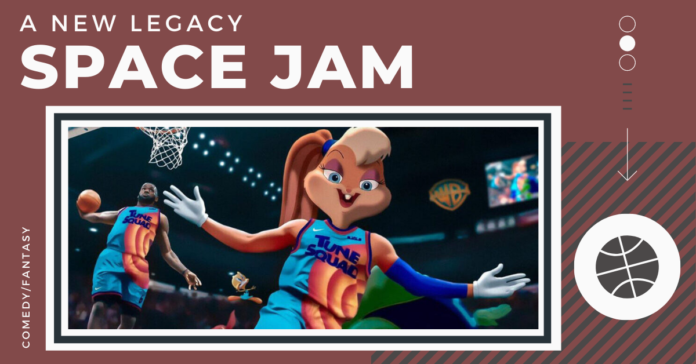 There are a handful of actor duos whose performances together changed the cultural landscape. Paul Newman and Robert Redford, Robert De Niro and Joe Pesci, and, when they came together in 1996, Michael Jordan and Bugs Bunny. The original “Space Jam” is one of the most popular and impactful children’s movies of the last 30 years, taking the brilliant idea of mixing real life with animated cartoons from “Who Framed Roger Rabbit,” and improving on it by focusing on well known characters and adding one of the biggest stars of the 90s—Michael Jordan.

The success of the film incentivized Warner Bros to create a sequel, but most ideas, including a NASCAR themed “Race Jam” and a Jackie Chan-centered “Spy Jam,”  never got further than a rough draft. Finally in 2014, nearly 20 years since the release of the original, basketball phenom LeBron James was tagged to star in the series’ next installment.

“Space Jam: A New Legacy” is not exactly a direct sequel to or full reboot of 1996’s “Space Jam.” While the Looney Tunes do make a couple of jokes referencing the last time they teamed up with an NBA superstar, the plot of the new film has nothing to do with the original. The movie it most resembles is Disney’s “Ralph Breaks the Internet.” Rather than just focusing on LeBron James and the Looney Tunes, the film takes the opportunity to show off all of Warner Bros numerous properties like DC Comics, Harry Potter, The Matrix, Game of Thrones, and Casablanca. The movie is filled to the brim with easter eggs and references which are likely to improve its rewatchability over time.

The acting and the plot can both be classified as passable. It’s unlikely that LeBron or Don Cheadle are going to win any awards for their performances, but they both do a good enough job at keeping it interesting. Just like the original, “Space Jam: A New Legacy” did not do well with critics, and while it’s no “Citizen Kane,” it’s still a very entertaining flick. For moviegoers looking for a fun movie that the whole family will enjoy, “Space Jam” is one of the best options in theaters this summer.