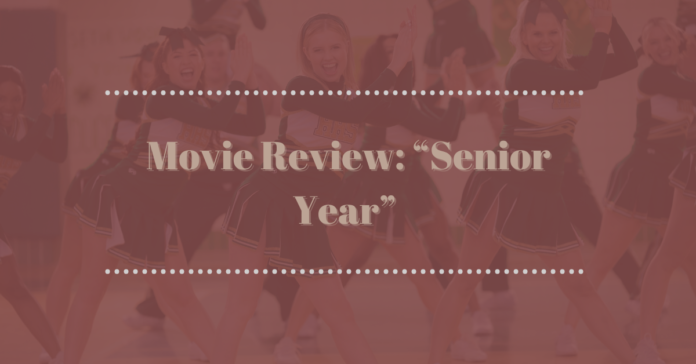 “Senior Year” is a comedy twist on the classic “nerd wants to fit in” story. The main character Steph, played by Rebel Wilson, is a “nerd” from Australia that moves to America in the 90s. She decides that she wants to be popular and does anything to work her way to the top. Steph thinks she has it all, but proves herself wrong when she’s dropped during a cheerleading stunt and lands in a 20-year coma. When she wakes up in a 37-year-old body, all she wants is to go back to high school so she can resume her plan to have “the perfect life.”

Here are some things you should know before watching. First, this movie is exclusive to Netflix and is rated R as the film has adult language, sexual references, underage drinking, etc. The language is notably vulgar and can be extreme for young or even adult audiences.

Second, the main character, Steph, becomes increasingly harder to like because she’s selfish and shallow throughout the movie’s entirety. She’s stuck on having the “perfect body,” the hot boyfriend, becoming prom queen and fitting in with the status quo. The movie tries to make the point that you don’t need to have the “perfect life” to be happy with your life, and Steph’s friends, new and old, remind her of what is most important, which is being yourself.

Overall the movie brings a full range of emotions, from laughing at Wilson’s crazy ideas or crying because you can relate to being the new kid with no friends. The movie tries to portray a positive message and is a fun to watch, notably because Rebel Wilson, previously in Pitch-Perfect (as Fat Amy) and The Hustle, has a truly comedic character and plays it very well. Though the movie can’t really be classified as a must-watch, it’s definitely an entertaining one.