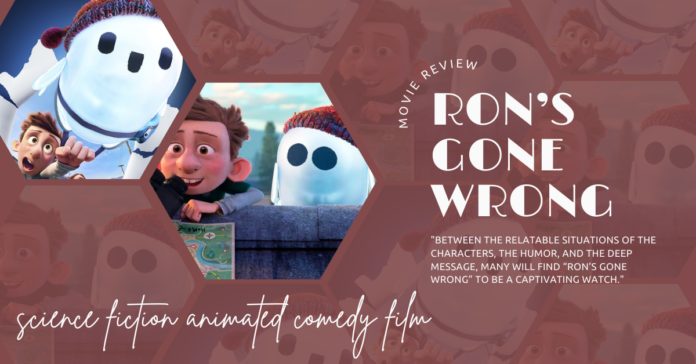 How would you feel having a best friend designed specifically for you? The new animated film, “Ron’s Gone Wrong,” may help you answer that question.

Barney, (voiced by Jack Dylan Grazer) is a lonely middle schooler who is further isolated from his classmates by not owning a Bubble Bot, the latest technological device. Being secluded by not having the latest and greatest thing is a prevalent theme in modern society, so it fits well here. Barney’s struggles with loneliness at his age are deeply explored, which makes it easy to sympathize with him. The Bubble Bot, essentially a robot, is programmed to be the owner’s best friend and helps with making friends through easy access to social media. Barney finally receives one for his birthday, but it has programming errors, therefore leaving it unintelligent.

Through their many adventures, Barney comes to appreciate his broken robot, who he names Ron (voiced by Zach Galifianakis). These random adventures are a joy to watch, as they show Barney finally making a friend while providing plenty of humor. Chaos ensues, however, as Ron sees his shortcomings compared to the other Bubble Bots as a hindrance to Barney. As the makers of Bubble Bots seek to destroy Ron for his errors, Barney must convince him of his worth while keeping him safe. It’s a familiar plot style, but one that doesn’t hold the movie back.

“Ron’s Gone Wrong” excels at sending a thought-provoking message on the potential dangers and benefits of social media through a mostly upbeat movie and leaves the audience, both young and old, evaluating social media usage. Through the immense goofiness, there’s plenty of emotional moments that give depth to the characters.

Younger kids viewing this movie may not understand the instances of live streaming or video sharing in the movie or some of the social media aspects involved, though they will be able to somewhat understand the plot. Given this, it’s unclear what specific audience it’s for, as it may seem too childish for many adults. It’s an outlandish movie overall, but it’s the kind of outlandish that fits an animated movie.

The film isn’t groundbreaking by any means, but it’s a fun experience for those who typically enjoy PG-rated animated movies. Between the relatable situations of the characters, the humor, and the deep message, many will find “Ron’s Gone Wrong” to be a captivating watch.