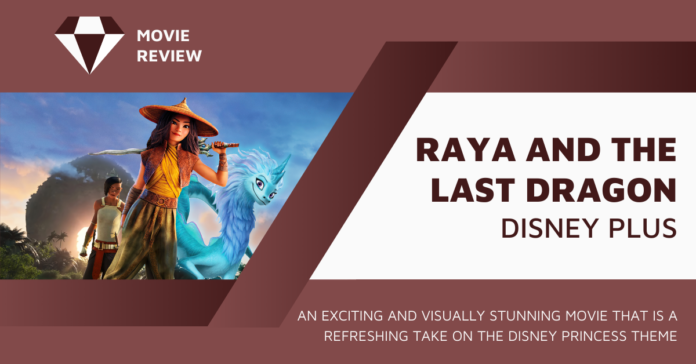 It’s no secret that the whole Disney princess concept has started to feel a bit overdone in recent years. Ever since “Snow White” in 1937, we’ve generally had plot lines of women whose stories were largely driven by the introduction of some man (usually a love interest) who whisks them away to a better life. Given the official Disney Princess line-up, the only real exception is “Brave.” Even “Moana” and “Mulan” have stories that heavily feature a male companion. Though not yet officially a part of the Disney Princess franchise, Raya (Kelly Marie Tran), breaks that mold.

As the main character of “Raya and the Last Dragon,” Raya is a strong-willed independent woman. Although there are a couple of guys that join her team as they collect the missing Dragon Gem pieces, they don’t shoulder much of the narrative weight. That burden mostly falls to Raya herself, Sisu the dragon (Awkwafina), and one of the main antagonists of the film, Namaari (Gemma Chan). On top of that, Raya is considered Disney’s first Southeast Asian princess (if you ignore the fact she’s from a fictional land), making her a powerful role model for a group underrepresented in media.

Now, putting representation aside, “Raya and the Last Dragon” is a fun and thought-provoking movie for the whole family to enjoy. The main story line follows Raya as she travels across her decimated and divided land in search of the divided pieces of the Dragon Gem. The end goal is to reunite the countries of the fictitious Kumandra and banish the Druun – a terrifying force that turns everyone it touches to stone. Along the way, Raya meets up with several lovable side characters while being tracked down by the Fang princess, Namaari. Overall, this film is an adventure filled with action and heart. In fact, Raya herself literally comes from the land known as “Heart.”

As expected of Disney movies, the visuals are mostly on point with cool effects and smooth animation. One of the problems with the film though comes from the character design – specifically that of the dragons. Throughout the film, it becomes apparent that every dragon uses the same (or very similar) character models. Every dragon has the same face and general shape, making the mystical creatures a little boring.

A bigger problem some people have with the film is the resolution. The plot can definitely be seen as anticlimactic and too easily solved. Because the main message of the film is about trust, trust is all it takes to resolve the main problem in the movie. By the same token, though, this message of unity and faith in others is something that correlates with some of the problems we face in today’s society. So, it’s really up to the viewer whether this is a problem.

“Raya and the Last Dragon” is an exciting and visually stunning movie that is a refreshing take on the Disney Princess theme. Though there are a few holes in the story, overall, it is a fantastical watch with an inspiring message.