“Knives Out” is a mystery comedy thriller with a bit of a new twist. Think Agatha Christie’s English Country House murder meets America in the 21st century. With numerous big name actors including Chris Evans and Jamie Lee Curtis, the story is based on finding the cause of death of wealthy author Harlan Thrombey (Christopher Plummer). His death appears to be a suicide, but something seems off, so Mr. Thrombey’s family is lined up for questioning.

Now, it’s not a long shot to describe the family of Mr. Thrombey as dysfunctional and self-centered, and as each character tells their story, everyone’s name gets tossed through the mud. After hearing all of this, Detective Blanc (Daniel Craig) pieces together numerous motives to explain the death of Mr. Thrombey, but with the help of Marta, Mr. Thrombey’s nurse played by Ana de Armas, Blanc is able to discover the truth.

The movie begins with each character describing their whereabouts the night of Mr. Thrombey’s death, and this leads to the main drawback of the movie—a slow start. But things pick up after Detective Blanc establishes a clear story of what actually happened, making it hard not to enjoy this well-scripted movie with witty jokes, an easy to follow plot, top notch acting and hilarious banter between characters.

“Knives Out” is best suited for adults and older kids as the story line gets a bit dark and is available on Amazon Prime. 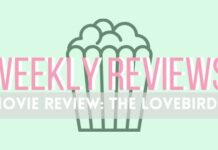