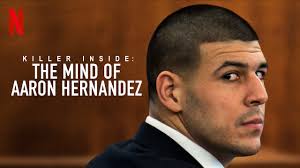 The documentary entails loads of details about his upbringing and how it affected his roles in the crimes committed. Born and raised in Bristol, Connecticut, Aaron Hernandez was one of the most promising young football players of his time. His talent accelerated him past his peers in high school, and even at his top tier college at the University of Florida. At 20, Hernandez was drafted into the National Football League by his hometown team, the New England Patriots. He made a name for himself by having the perfect strength and hands of a dual-threat tight end, as well as one of Tom Brady’s favorite targets. However, everything came to a screeching end after Hernandez was convicted for one of the most infamous murder cases involving an athlete since OJ Simpson.

Fresh off a five-year, $40 million contract, Hernandez became involved in the killing of Odin Lloyd. The trials of the murder uncovered an entire universe of secrets of one of NFL’s rising stars who was living a dangerous second life.

Stream this recently added documentary on Netflix and gain a new understanding on the life of Aaron Hernandez.