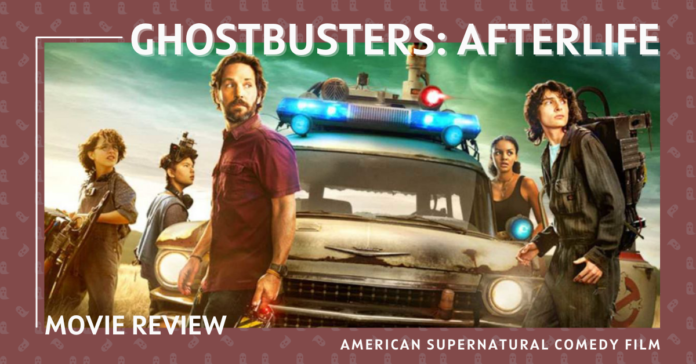 37 years later, everyone still knows who to call during a ghost encounter. “Ghostbusters: Afterlife” establishes its own identity while shrouding itself in nostalgia, making it a film dedicated fans will appreciate.

Callie (Carrie Coon), a single mother with two kids, inherits a dilapidated farm from her father in the small and seemingly uneventful town of Summerville. This indicated dad lived a meaningless existence, until her kids, Phoebe and Trevor, uncover the secret geniusness of their grandfather. Phoebe (McKenna Grace), steals the show in her role as a 12-year-old science prodigy. While their mother looks to make ends meet, Phoebe and Trevor (Finn Wolfhard) seek a sense of belonging in their new home. The family’s experiences, between making new friends, finding a sense of identity, and falling in love, are just as entertaining, if not more so, than the actual ghost hunting portion of the story.

While Ghostbusters films were never meant to be taken too seriously, the plot becomes laughable later in the movie, and not in a good way. Furthermore, the film constantly shifts from being visually stunning to looking extremely low-budget, which makes it difficult to remain immersed. If not for the stellar performance of the main characters, it wouldn’t be worthy of a watch. Near the end, the film regains its footing with some emotional moments and surprises.

“Ghostbusters: Afterlife” is a mixed bag that probably isn’t for those not interested in the franchise, but the passionate fans will definitely find some enjoyment in the sporadic nostalgia and captivating character work.