Directed by Fede Alvarez and starring Stephen Lang, Jane Levy, and Dylan Minnette, the film “Don’t Breathe” is the must-see horror movie of the fall. Including strategically planned jump scares and a shocking plot twist, “Don’t Breathe” has audiences on the edge of their seats from start to finish.

Three young thieves from Detroit, Rocky (Levy), Alex (Minnette), and Money make their living off of stealing from the wealthy. Hoping to save herself and her younger sister from their abusive mother, Rocky will do whatever it takes to get enough money to escape to California. When they hear of a blind veteran who received a major settlement after the death of his daughter, they peg him as an easy target. Upon entering his secluded home, they find that he is not the helpless victim that they thought he was. After making a shocking discovery about their so-called victim, they must fight to make it out of his house alive.

Stephen Lang stars as The Blind Man, and while his dialogue is scarce, his impact leaves viewers on edge. Although the film doesn’t portray the typical horror conventions, the shock and effect of the movie earns the well-deserved label and nestles well within the genre.

Along with the violence and shock, one aspect that leaves viewers feeling uneasy is the complete reversal of the traditional good vs. evil plot. In the usual home invasion story, the audience is accustomed to feeling sympathy for the victim. But in “Don’t Breathe,” this simply is not the case. Once The Blind Man’s secrets are revealed, you find yourself hoping that the robbers make it out alive.

With the methodical sound effects and constant dread felt both in the film and the theater, “Don’t Breathe” is sure to please those who love horror. With a plot so shockingly realistic, you’ll find yourself sighing with relief as the movie ends and the credits roll. 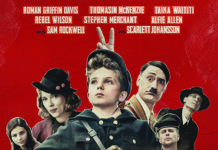