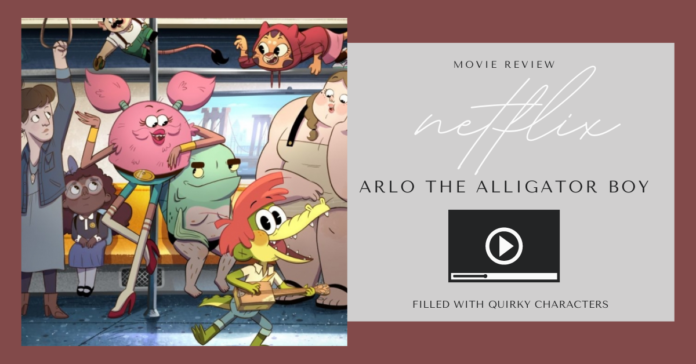 Brightly colored and filled with quirky characters, “Arlo the Alligator Boy” is a story of finding family. “Family,” referring to both those related to us by blood and those unrelated people that accept and welcome us as family.

The musical follows Arlo (voiced by Michael J. Woodard), a half-alligator, half-human hybrid who grew up in the swamp after being cast out by his biological parents. While in the swamp, Arlo is without any friends except his adoptive mother, Edmée (voiced by Annie Potts), and feels rather lonely. That is, until he is told about his father living in New York City. Armed with this knowledge, Arlo leaves Edmée’s reclusive hut and travels into the world for the first time.

Along the way, he finds a woman with gigantism named Bertie (voiced by Mary Lambert) and a ragtag group of outcasts that join him in his travels. As the film progresses, we get to watch this group become closer and open up, usually due to a musical number or Arlo’s innocent questioning. And because every movie needs antagonists, two owners of an alligator-themed swamp attraction hunt Arlo throughout the film, seeking to use him to save their failing business.

Although it leads to some tough situations for our main characters, by the end of the film, the problem with the alligator hunters seems to resolve itself. Although this is less than satisfying, it could signal a larger role they’ll play in the series continuation of the movie, which Netflix plans to release later this year.

The overall theme of the film is about being yourself and accepting people for who they are. It doesn’t matter if you’re green, covered in hair, large or small. This isn’t exactly a new idea, but does have a place in the current climate. Plus, the touching musical numbers and vibrant colors make the movie a pleasant watch despite the formulaic presentation.

“Arlo the Alligator Boy” seemed a bit anticlimactic with certain plot points, but it’s likely those will resurface in the following movie. Overall, this film is fun to watch and an exciting start to Arlo’s story. If you enjoy musicals and fairly light-hearted animated movies, this may be a good one to look into.