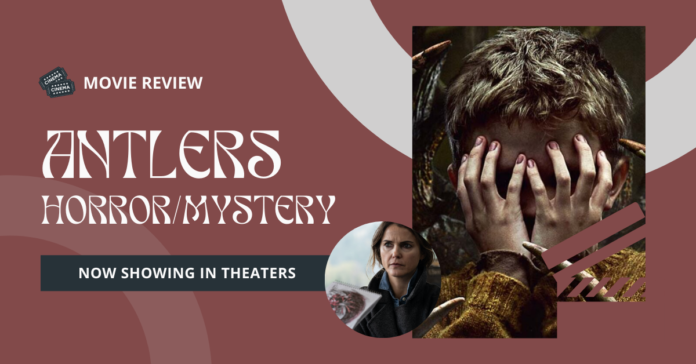 If you somehow didn’t get enough terror in your life this past Halloween season, director Scott Cooper is keeping the scares coming with his new macabre film, “Antlers.”

Taking place in a small mountain town in Oregon, the beauty of the setting, through the quaint city and bustling nature, will have you packing your bags to visit. Well, at least until their dark secret comes to light.

Lucas (played by Jeremy T. Thomas), is a seemingly innocent 12-year-old boy, while in actuality, he carries a huge burden, as he comes home daily to a malnourished brother and an abusive father who is transitioning into an otherworldly being. Lucas’s teacher, Julia ( Keri Russell), takes notice of Lucas’s strange tendencies, and feels compelled to reach out to help him. But she has no idea what she’s stepping into. With the help of her brother Paul (Jesse Plemons), the local sheriff, Julia looks to uncover the secret plaguing Lucas, and soon to be plaguing the entire town.

“Antlers” takes a unique approach compared to other horror movies, taking a detour into the drama genre to explore the effects of abuse. Julia and Paul were both abused by their father, and they’re still working to mend their strained relationship while coping with the trauma many years later. Julia uses her past experiences with abuse to connect with Lucas, who shares many of the same troubles. While the entirety of the movie is dark, it refrains from attempting to truly scare the audience most of the time, with the exception of a few truly horrifying scenes.

An issue that will deter potential viewers is the obsession with the dark tone. Yes, it’s a horror movie with a supernatural premise, but it’s hard for the viewer to immerse themselves in this world when the overwhelming gloominess strips some of the realism. While this helps to emphasize the mental turmoil of the characters, the grim feeling that’s established begins to feel hyperbolic. If this was strictly a horror movie, it wouldn’t be a problem, but given the more drama centered plot, it hurts the presentation.

“Antlers,” through its stunning visuals, suspenseful plot and gripping characters, will keep your eyes glued to the screen, until you can’t help but turn away in fright. If the grimness of the plot doesn’t scare you off, and the premise sounds interesting enough, this overall well put-together movie is worthy of a watch.