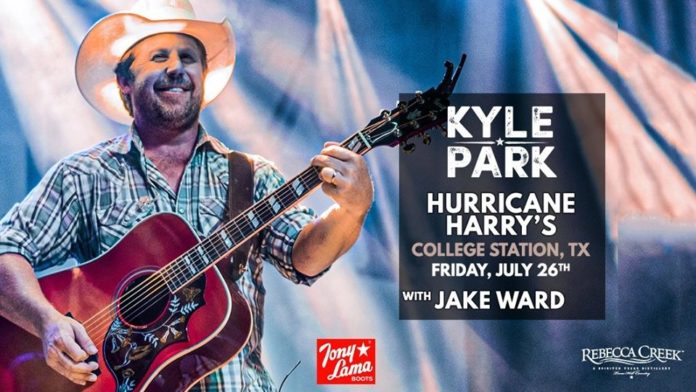 There’s nothing better than spending your summer with some great music. And what better landmark to enjoy it in than Hurricane Harry’s? So get ready to saddle up for another couple of weeks of spirited musical performances in College Station!

Get ready for a southern treat because first up this Friday is a concert from Texas country music legend Kyle Park! Born and raised north of Austin, Park fell in love with country music from a young age and released his first album almost 15 years ago when he was only 20 years old. Inspired by artists like Roger Miller and George Jones, Park continues to reach new heights with his own music, like performing with his band across states and countries and having seven #1 singles on Texas Regional Radio Report. How impressive is that? Park is no doubt a seasoned veteran of the Texas scene, so be sure to come and enjoy a midsummer treat!

Traveling with him is Corpus Christi based country artist, Jake Ward. Alongside his band, Ward’s success was initially spurred onward with his first single, “Hit the Road” in 2014, which became one of the top 100 Texas radio songs that year! While Ward and his band are relatively new to the stage — their debut album “Love Don’t Live Here” was released in 2015 — they have made a name for themselves with their blend of classic country and contemporary rock held together with rich harmonies.

Hold your horses, there’s more music where that came from — and not just country! This time, Hurricane Harry’s will have you mellow down with their last Summer Acoustic Series performance featuring Austin Meade, Judson Cole, and guest Ben Kadlecek!

Besides seamlessly blending hard-hitting vocals with a bluesy guitar sound, Austin Meade comes to College Station as a Texas A&M alum despite being from Austin. Meade initially made his start as a drummer but now leads his band as a vocalist and guitarist with inspiration from rock ‘n’ roll and Oklahoma Red Dirt legends. Now, his latest EP, “Heartbreak Coming” continues to bring the “nostalgic American rock” we can’t get enough of. So prepare yourself for a fresh sound that will resonate with the young as well as those who yearn for that classic 70s guitar sound.

Strumming by his side will be Red Dirt and Texas country musician Judson Cole from right here in College Station. Cole and his band set off their career with the intention of pouring their experiences into their music. Amidst all the Texas country artists out there, Cole has left a mark on the genre with his raw tellings of personal growth and heartbreak.

Sharing the stage alongside them is another College Station resident and Aggie, Red Dirt artist Ben Kadlecek. Though new to the music scene, Kadlecek’s musical history is nothing if not passionate. Just last year, he released a single and followed it with his 5 track debut EP, “Brazos County Bound.” Ever since, Kadlecek has been making leaps and bounds with his band as well as his talent on guitar and keyboard.

Doors open at 9 p.m. and the show begins at 10 p.m. Tickets will be available at the door. To find out more about this event, visit https://bit.ly/2WDsAgX.