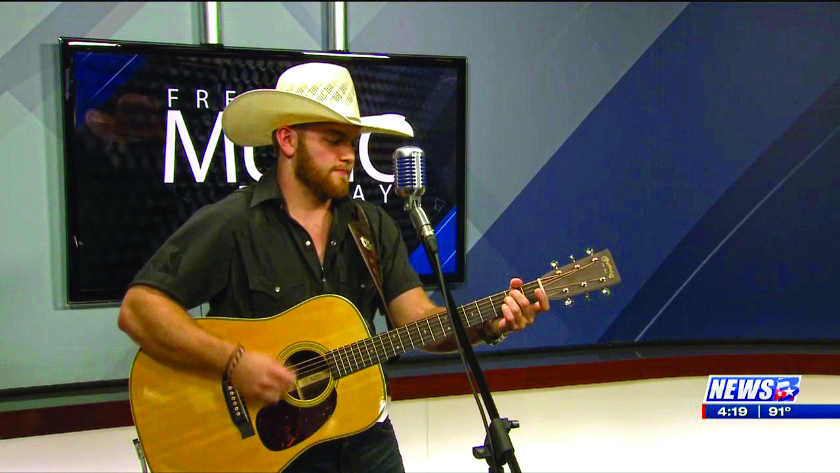 Get ready, y’all, there’s a brand new country artist in Texas, and it doesn’t hurt that he’s an Aggie! It’s only been a year since Haddock began his singing career, but his popularity has skyrocketed. He most recently added on a full band with four guys, and they will perform together for the first time at The Tap on Saturday, February 9. Brayden Zink will open at 9 p.m. and Haddock will follow, and there’s no cover charge.

The night will include his full debut album, “First Rodeo,” some covers to sing along to, and some new tracks that are yet to be released. Haddock says, “Come out and expect a high energy show!” There will be plenty of merchandise available as well.

Texas A&M student during the week and a talented performer on weekends, Haddock’s music career doesn’t have the cliché story of playing guitar since he was two, but he comes pretty close. At 14, after seeing Kenny Chesney and Eric Church perform, Haddock set his mind to it and learned guitar.

Fairly new to the country music world, Haddock’s songs are co-written with good friend Ben Tyler Johnson. Haddock explains why he enjoys co-writing, “I like co-writing better because it broadens the horizon. I could write a line and tie a meaning to it, while my co-writer may pull in a different perspective and change the dimension of the song.” Haddock enjoys having different stories combine into a song, “It makes the song more relatable, instead of it being all about me.”

Being a student and full time performer gets tough, and Haddock says it’s difficult sometimes to balance his time, but he works really hard in school as well as in his music. “I’ve learned this business goes up really fast but it also goes down really fast, and school is important to me as well.” Sounds like some pretty wise words.

One of Haddock’s favorite songs is, “Don’t Bother Calling,” because it has power behind the lyrics with a slightly darker tone. and it’s easy for people to relate to an ex calling, oblivious to the other’s feelings,” he explains. This is only one of many songs on his newly released album. Check him out on Spotify or just come on in to The Tap for his free show, and bring your friends, cause it’s clear this isn’t quite his first rodeo and he’s headed for more!