Aggieland’s local Red Dirt celebrity has been burning up the nationwide country charts with chart-topping hits, hitting the road with the likes of Luke Bryan and Florida Georgia Line, and taking strolls down the red carpet at some of the industry’s most prestigious award shows. With so much on his plate, Granger Smith is a busy guy, but he still makes time to write music, focus on his family, and sit down with us for this exclusive interview.

MW: Your schedule has been incredibly busy this year with the release of your new album, sold out tour dates, and the newest addition to your family with a son; how do you balance everything?

GS: That is definitely the biggest challenge, career and family, and learning how to balance. We have always been pretty busy, but these last few years have just been insane, especially with a kid that’s so little, it’s hard for him to travel. We travel in two buses now which helps a lot. I can get co-writers, I write a lot on the road now, almost 100%, then we get co-writers that fly out and meet us on tour and ride with us for a few days. I have full recording gear in the back of my bus, that has eliminated working from home at all now.

MW: So you are completely mobile?

GS: Yeah. So now when I go home, it is just 100% home time. I used to have to come home and write and then record work tapes of those new songs. So now I can do it all on the road and that has been a huge difference that has happened in 2016. It is the only way for me to really balance. There is a lot of overhead, but it’s a big investment towards being a dad and a husband, which is ultimately my number one goal.

Also, knowing that things are going to slow down in the future, no matter what, that allows me to work hard now, make hay while the sun is shining and knowing that – while momentum is rolling – we have to hit it hard.

The last thing is, knowing that I am out here, with a full open heart, travelling and living my dream with my guys playing music, that allows me to come home and be a better man, a better dad, knowing that I am fulfilling what I have always wanted to do.

I believe that makes me a better version of myself and not a mindless drone doing something that I hate. I use that as justification too.

MW: Talking about living the dream, you have been making music for more than a decade now and recently had a number one single with “Backroad Song;” what was it like hearing that news for the first time and what were you doing when you found out?

GS: I was in a town that I will never forget now, Fredericksburg, Virginia. We were there on tour on February 13, and my wife Amber was there travelling with me because it was Valentine’s Day the next day. So we went to a Valentine’s Day dinner knowing that the chart was closing that night – it was neck and neck with Luke Bryan. Every point matters across the country, so the chart doesn’t close until the West Coast closes, which is 3:00AM EST. Amber and I knew it was close, we were at the hotel just watching the chart and keeping in touch with the team. It wasn’t official until 3:00AM, but we celebrated and yelled and Facetimed a lot of the team members. That is something that may never happen again, ever, so we just cherished that moment.

Knowing that I am out here, with a full open heart, travelling and living my dream with my guys playing music, that allows me to come home and be a better man, a better dad.

It was such a testament to the team and so many people working so hard for that song and that moment. For a lot of them, it was their very first number one. It was special across the board. 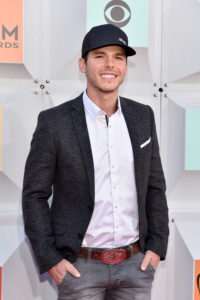 MW: Has there ever been a song you have recorded that you have really loved, but didn’t release it?

GS: Oh all the time, there are many of those. I am working on writing songs for a new album right now, and I’m liking the new stuff a lot, but that means we are going to move away from the current album. So then you look at the current album and it is a little bit sad. Those songs are like my children, from the concept phase, to writing, to recording, then editing and all of the work that went into it and the millions of listens. Then you move away from it and you never see it again. Some of the songs never even make the live show. When that happens and the years go by, they just get forgotten. Then I go back and I listen to them and they are like diaries of my life at the time. I listen to old songs and remember exactly where I was living and where I recorded it and how I wrote it, the girl I was dating at the time or whatever.

Songs are like my children, from the concept phase, to writing, to recording, then editing and all of the work that went into it and the millions of listens. Then you move away from it and you never see it again.

MW: If you had to choose two favorite songs that you have ever recorded, what would they be?

GS: It is hard to pick just two. It depends on the mood I am in. I will go back and listen sometimes and think, “oh, I forgot about that one, that is my favorite.” But off the top of my head I would say “Colorblind,” that was like three or four albums ago. It was written and recorded in College Station, it came out on an album called Living Like a Lone Star. That album was the very first album that I recorded top to bottom in my house in College Station. [Colorblind] was one of the first songs I wrote for that album and it was also the first single to release to Texas radio.

After that I would probably say the first Earl Dibbles track, which was the “Country Boy Song.” I recorded that at my house when I was living in Round Rock. That was one I will never forget, we had so much fun. There were no rules to that song. No rules to the lyrics or recording. It was just so fun going way over the top with that.

MW: Earl Dibbles Jr. has quite the dedicated fan following these days. What’s it like essentially being two different entertainers and is that stressful?

GS: It definitely isn’t stressful. It is easy, which is crazy, to switch back and forth, because I have done it so many times now. This is the fifth year of being Earl, so he is 5-years-old. We have a blast with it. We don’t do it every single place we go. There are sometimes where we make a decision that Earl isn’t going to come out tonight. It might be because of time constraint or just because of a certain audience, but we do it a lot of the time and we just have a blast – I look forward to it. Even if I am having a boring night, I think to myself, “at least I have Earl coming later.” He makes everything better.

MW: If Earl ever met Granger, do you think they would get along or would Earl think Granger was a city boy?

GS: He probably would think Granger was a city boy, but then again, he doesn’t like very many people.

MW: You just announced upcoming tour dates with Florida Georgia Line and Luke Bryan; what can fans expect to see at these upcoming shows?

GS: People that know country music know that our music is kind of all over the place, so going into the tour it is going to be a challenge. I know I just need to be me. I’ve got to go on the stage with my blue jeans and Red Wings and be Granger – that is going to be a fun challenge. Every artist, if you have gotten to this position, you have a little ego and a little bit of insecurity combined – you take those head on. So when we go on this tour, we are going to put on a Granger show. We are going to put on the same show we would put on at Hurricane Harry’s. I think that is going to be fun. Hopefully that reflects back to the people.

MW: Next week you will be making your way to the CMA Awards in Nashville; what is it like to be behind the scenes at these events?

GS: One of the coolest things about these awards shows is that every single artist in country music is there. We might see each other a couple times a year out on the road, but then everyone comes together on the red carpet and you see everyone. You get to catch up. Sometimes you are waiting to do an interview, like if Country Weekly is standing there, or CMT, and there might be a couple of artists in front of you doing an interview – so you are just hanging out on the red carpet. That is when you get to just shoot the bull with the other people around because everyone is waiting. That is the coolest thing about it. You get to meet everyone’s girlfriends and wives, boyfriends, all that.

MW: Besides hitting number one on the charts this year, what has been one of the major highlights in your career?

GS: If I am talking about the highlight of my career, I have to go back to 2007 – 2009 when we took some tours over to Iraq. I still haven’t met those feelings, the fulfillment of what music can be. It was just so great during those tours. Business wise and professionally this year has really surpassed all the rest for me. We got the number one song, we have a Luke Bryan and Florida Georgia Line tour, we are playing some of the major festivals across the country – it is just fantastic being on those stages. Bringing a little bit of what I do to those stages has just been a great feeling.

MW: What’s the next big thing we can expect to see from the Granger Smith crew?

GS: We are working on the new album and a new single. “If The Boot Fits,” as we speak, is number 17 on the chart. If everything goes as planned we will be making a number one push for that song around Valentine’s Day. All of our focus right now is on “If the Boot Fits” and hoping to get another Top 10 or Top 5, maybe even number one. After that it is all new stuff.