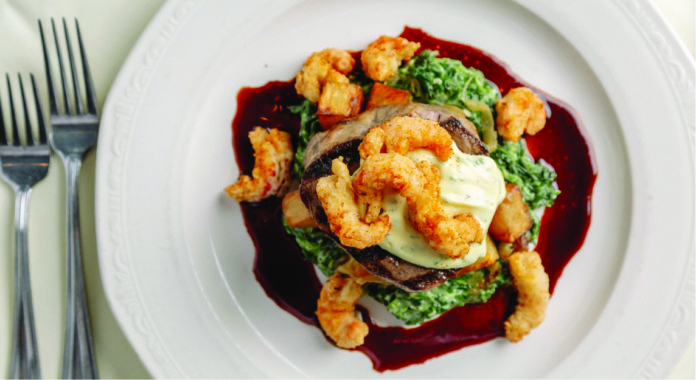 Let’s be honest, everyone wants to travel the world. Packing up and heading out into the world to see the sights, shop the shops and, of course, try all of the foods is a grand idea, but the trip itself can be a headache. So if you’re not looking to travel the world this year or are more of an armchair traveler, you might want to check out Christopher’s World Grille, because for one very special night, November 22, Christopher’s is celebrating its 20th year in BCS with a “Dine Around the World In One Night” event.

In 1998, after capturing numerous awards, Lampo moved back home to Bryan with the goal of starting his own world-class restaurant. In 1999, he opened Christopher’s World Grille. While serving as a private chef on one of the world’s largest yachts, Lampo gained experience and knowledge of foods from all over the world, and his travels as a distinguished chef haven’t slowed a bit. To celebrate his restaurant’s 20th year, Lampo is hosting “Dine Around the World in One Night,” a night of fine dining with influences from around the world. Lampo’s menu for the event will feature food from his travels, so you can enjoy the delicacies of the world from the comfort of BCS.

The night will kick off with a welcome cocktail from the Kingdom of Tonka, a Tonga Kava Colada. After that, first plates from Indonesia, Alaska and France will include vegetable trays with peanut sauce, onion tarts and smoked wild trout salad. Second plates will be from Italy and Canada and will consist of ambassador’s pasta and Canuck garlic fingers with donair sauce. Head out to sea and visit Fiji and the Solomon Islands and Hawaii for third plates of steamed redfish with coconut milk and lime on coconut rice and marinated tuna salad. The food (and fun) won’t stop there though. Fourth plates will be from Christopher’s American Grille in England with seared duck and then pumpkin puree from Australia. From the Kingdom of Tonka and Papua New Guinea come fifth plates of pork, sweet potato and plantain in banana leaves. The sixth and final plates, aka dessert plates, will be Pavlova from New Zealand and ice cream from Raoul Island.

The event will take place on November 22 at Christopher’s World Grille in Bryan. The evening will begin with a reception at 6 p.m., and dinner will begin at 6:30 p.m. Tickets are $95 per person and reservations can be made online, but you can also call, email or visit Christopher’s in person to save your seat. Unfortunately, substitutions for dietary accommodations will not be available. If minimum ticket sales are not met, the event may be cancelled one week prior to the event with a full refund.