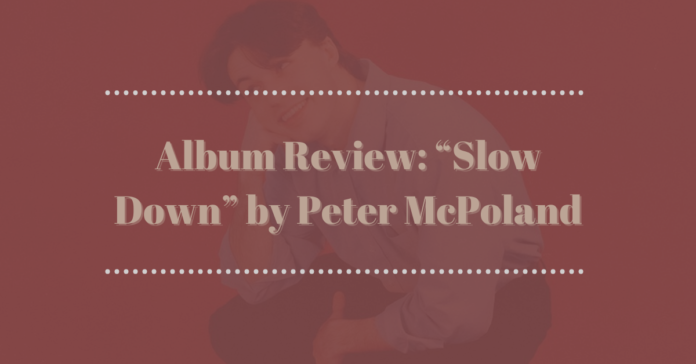 If melodies could kill, then Peter McPoland’s new album “Slow Down” would be deadly.

This unapologetically hopeless romantic has revolutionized the alternative genre. After releasing several singles since 2018, McPoland has now released his first full album. “Slow Down” includes new releases of the four songs on his 2022 EP and three new songs.

First released on his EP, “News At 9” features an ambulance siren McPoland accidentally recorded while making a TikTok. It’s the ambulance that transforms the song from beautiful to captivating. Details like these separate McPoland from other contemporary artists.

The three new releases include “Slow Down,” “Dead Air,” and “Mary Anne.” “Slow Down” is begging to bellow through car stereos during those deep-thinking heavy drives. It only takes three seconds to love “Dead Air.” And in “Mary Anne,” McPoland sings hard-to-hear lyrics. With lines like, “Hurting is half of the best part of falling in love,” he sings about choosing joy, even if pain is inevitable. Each song is unlike the other in mood and melody, yet somehow McPoland remains consistent in style.

McPoland sings about specific yet relatable experiences. On social media he gives insight into his perspective and how he wants to share it with audiences. Between falling in love, falling out of love, and finding yourself, McPoland writes it all, romanticizing his joy and his pain in a way that makes it all beautiful. He cries over his lyrics, and this album invites you to cry with him.