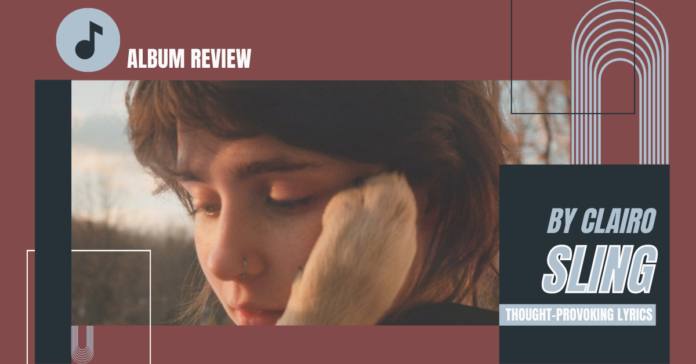 Whether it’s for studying, driving, or simply relaxing, it’s nice to have music available that’s smooth and calming. And when that music is full of thought-provoking lyrics, even better. For anyone looking for these kinds of tunes, Clairo’s new album “Sling” fits the bill.

The lyrics of this album can easily fade into the background in the same way good cafe music might. But by the same token, each song tells a story of emotion and losing innocence with age, so the lyrics are certainly worth a deep listen.

With “Sling,” Clairo (Claire Cottrill) moved on from the routine issues of crushes and squabbles with friends to commenting on society, the patriarchy, and her personal emotions. According to Clairo, the addition of her new dog, Joanie (on the album cover), gave her an epiphany to open up and treat herself and her mental health better. She realized she needed to give herself the same respect she gives to those she cares about—like Joanie. This is the driving force behind “Sling.”

The lead single of the album, “Blouse” uses hushed tones and a smooth melody to discuss older men who only listen to her for a look “down the blouse.” This song, and others in the album, are about losing innocence and realizing that many people will feign showing respect if it means they get what they want out of it. While this is a depressing subject, the album goes on to songs like “Management”  that show Clairo coming to terms with her lack of self-respect and trying to change so her future self can be happy. Similarly, “Reaper” remembers that someday she’ll have a family to take care of—children of her own that she can save from the inner suffering she struggles with.

“Sling” isn’t an album for everyone. For one thing, some of the more mature and upsetting themes may make this album less entertaining for some people. It can also feel slow, and many of the songs sound similar enough that you may not always pick up on the track change if you’re not paying much attention. That being said, it’s still a beautiful playlist, especially for those who want to play something in the background that’s not too interruptive. Clairo’s album is stunning and an excellent listen.