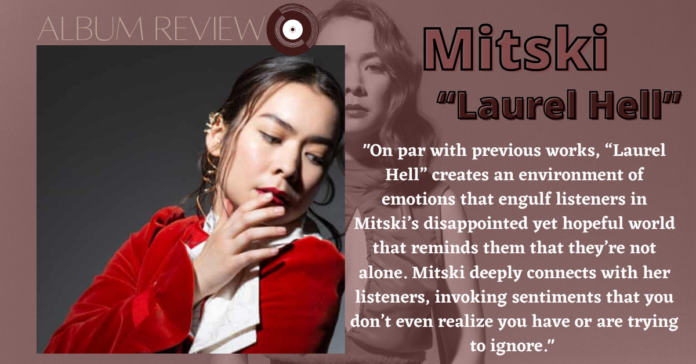 Close your blinds and get our tissue box ready. Mitski dropped an album early this month, and like her previous work, it has listeners in their feels.

It ‘s no surprise that Mitski can create something so jam-packed with emotions. On February 4, Mitski released her sixth studio album “Laurel Hell.” Fans have widely anticipated this album following the single “Working For The Knife,” which she released in early October of 2021.

On par with previous works, “Laurel Hell” creates an environment of emotions that engulf listeners in Mitski’s disappointed yet hopeful world that reminds them that they’re not alone. Mitski deeply connects with her listeners, invoking sentiments that you don’t even realize you have or are trying to ignore.

This album sets the listener in an atmosphere of 80’s synth, adding Mitski to the synth list of other new music released this year, such as The Weeknd’s recent album, “Dawn FM.” But her beautiful voice and raw sense of relatability remind her fans why they love her so much and make it easy for new listeners to feel the same. Currently classified as a somewhat niche artist, Mitski’s quality of work on “Laurel Hell” proves she’ll reach superstar status like Lady Gaga and Lana Del Ray.

Tune in today on all major streaming services to experience the harmony Mitski creates as she plays your heartstrings.