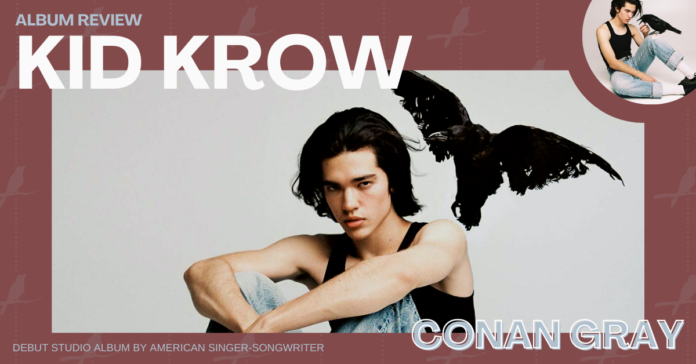 Unafraid to tell stories from a different lens than what has been deemed as normal by society’s standards, Conan Gray makes a huge impact with his first studio album, “Kid Krow.” Throughout the album, Gray is nothing short of raw, authentic, and unique.

In the opening track, “Comfort Crowd,” Gray talks about a feeling all too familiar for most people: being lonely and missing those closest to you. Gray refers to these friends that he misses as his “Comfort Crowd” as he knows this is the group where he would be the most comfortable and vulnerable.

One of the standout tracks on the album has to be “Heather.” Largely accompanied by an acoustic guitar, this one tells the story of unrequited love that a boy has for another boy who is in love with a girl named Heather. Though unrequited love is a theme very common in music, this song achingly expresses experiences that are underrepresented in media.

In “Little League,” Gray discusses his longing to go back to the simpler times. Over light and melodic instrumentation, Gray has the lyrics, “And everybody’s tellin’ me to act my age, I never thought that everything I had would fade away,” showcasing how quickly our childhood slips away and to enjoy being in the moment.

Gray has only begun to make a splash in the music industry, and his ability to tell stories is truly unique. “Kid Krow” can be described as a coming of age album. Nevertheless, it’s an album worth giving a listen to.