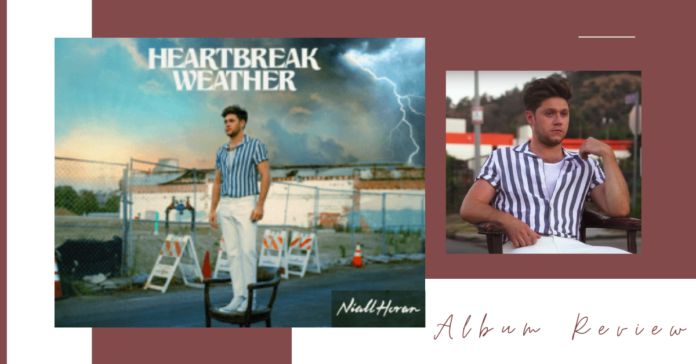 While many people may know him as part of one of the most successful boy bands to date, Niall Horan has made a big name for himself during One Direction’s indefinite hiatus. Beginning his solo career in 2017 with the debut album, “Flicker,” Horan has not lost momentum, and released his second album, “Heartbreak Weather,” in March. While, for us Directioners, Horan’s newest album might not completely take away the pain of One Direction failing to reunite on their 10-year anniversary like we hoped, “Heartbreak Weather” is a great distraction.

“Nice to Meet Ya,” the lead single, was released in October of last year, which ignited the excitement for Horan’s sophomore album. The tune is noticeably edgier and more rock sounding than the tracks from “Flicker,” but Horan does a great job of staying true to his aspiring popstar roots while exploring alternative sounds. The fourteen-track album truly gives an unfiltered view of where Horan’s career is headed. His voice has an uncanny ability to embody all aspects of an emotional love ballad or breakup song, yet simultaneously exemplifying raspy rock-like qualities in other songs. There is also an air of comfort that accompanies tracks such as “San Francisco,” that seemingly transports you back to the nostalgic memory from years ago that you can’t seem to shake. Needless to say, versatility is one of Horan’s most valuable assets.

Horan continues to surprise fans and critics alike with his evolving voice and songwriting skills. Overall, he received rather favorable reviews, with most critics believing Horan’s second album was a maturity leap from the first. With all the progress he has made thus far, it will be exciting to see what Niall Horan’s future music has in store.