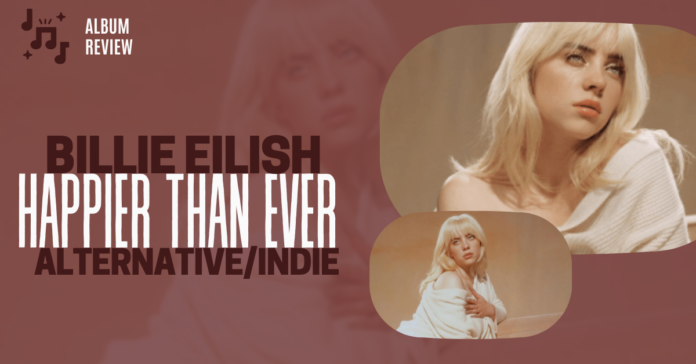 After two years, the wait is over for the young, extremely successful Billie Eilish to release her new album, “Happier Than Ever.” Eilish has become a staple in pop culture when it comes to her daring music and outlandish street style. Whether it be on stage, in the studio, or on the red carpet, Billie has proven that she does things in her own unique way, which has landed her as a multi-millionaire and seven-time Grammy Award winner at just 19 years old. Billie’s new album captures the inner monologue of becoming a woman as she transforms the way people view her.

Eilish continues to form a brand around pushing the boundaries of music lyrics with her honest, dark, writing style in “Happier Than Ever.” The album consists of 16 songs, two of which have swept across TikTok with a combined 3 million sound uses of the songs “Therefore I Am” and “Happier Than Ever.” Rather than including more upbeat songs on her new album, Billie slows things down with the majority of the tracks.

Although Eilish is an incredibly talented and successful artist, the new album did not live up to her hype. Due to their slow tempos, most of the songs bleed into one another and sound repetitive. Besides the two TikTok famous songs previously mentioned, there are not many more “hits.” Critics suspect Eilish of merely communicating her thoughts rather than seeking chart toppers with this album, which expresses both a shift and a sophistication in Eilish’s development as a musician. In the end, “Happier Than Ever” definitely  works better as an album to put on shuffle while you try to wind down rather than one to get you singing in the car.