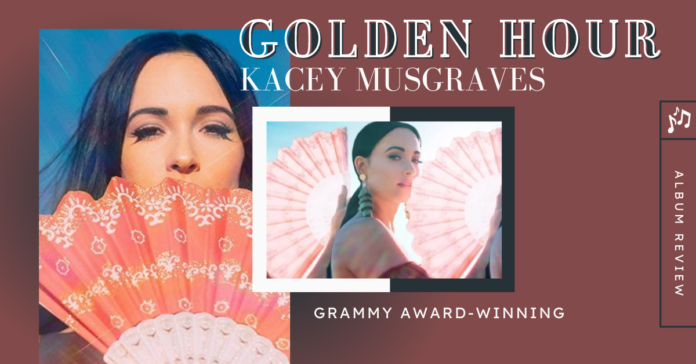 The idea of love has been music’s muse since the very beginning. Love can be interpreted in a variety of ways across different genres, but no one can capture its essence quite like Kacey Musgraves with her Grammy award-winning album, “Golden Hour.” Her third studio album takes a look at love and all its varying emotions that can sometimes be hard to vocalize.

Musgraves successfully captures the feeling of being so happy that it makes you sad in the song “Happy and Sad.” she sings, “You got me smiling with tears in my eyes.” Happy memories represent the high moments in life, but with every high, there’s also a low. Everyone experiences battling emotions, so the song is intensely relatable.

With songs like “Butterflies,” “Space Cowboy,” and the title track, “Golden Hour,” Musgraves focuses on being in romantic love. With these songs, Musgrave makes the point that love can be romantic but also real as she doesn’t try to romanticize love but showcases its ups and downs. After all, love is never truly perfect.

This album not only explores the feelings of love between two people but the love we have for our family, specifically mothers. The song “Mother” stands out not only because it’s the shortest track, but because its eerie nature grabs listeners’ attention, emphasizing the lyrics.

At its core, “Golden Hour” is a classic country album with its instrumentation, sense of storytelling and well-thought-out lyrics, but Musgraves experiments quite a bit and brings a modern-sounding interpretation of what country can be, self-terming it “cosmic country.” For example, the song “High Horse” is heavily inspired by disco era music. These influences make this a jamming-out song, giving it a different vibe from the rest of the album.

Kacey Musgraves’ “Golden Hour” takes the idea of love and country music to another level. This album is sure to become a defining classic, and even those who aren’t fans of country music should give it a listen.