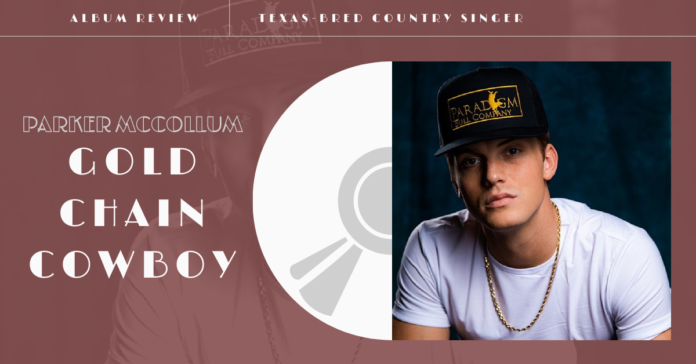 Every single lady’s favorite Texas-bred country singer, Parker McCollum, does it again with his new album “Gold Chain Cowboy.” McCollum, having made his way into Country Music Radio with his song “Pretty Heart”in 2020, continues to top charts and make a name for himself with his newest efforts. “Gold Chain Cowboy,” released at the end of July 2021, is McCollum’s first album in four years since his previous “Probably Wrong.”

Parker McCollum sticks to his usual brand of writing songs about heartbreak and includes two popular singles, “Pretty Heart” and “To Be Loved by You,” that were previously released earlier this year. Having proposed to his long-term girlfriend, Hallie Ray Light, this past July, it’s apparent the love songs were written about her, and it’s a quick leap to assuming that some of the heartbreak songs refer to their long-distance relationship during his time on the road. Through the use of his Texas twang and many Texas cities references, McCollum adds a flare to his music that separates him from other country artists. McCollum does a good job in this new album of bringing the uniqueness of story-telling that Texas country music is known for to modern day country radio.

“Gold Chain Cowboy” contains ten total songs that are relatable to anyone who has either been through a heartbreak or is currently in love. The song “Why Indiana” is sure to be a favorite and the upbeat tempo all too easily finds its way to constant replay in your head. Although McCollum has found success with his love songs, the album may feel similar and a bit repetitive compared to his previous music. On the whole, though, this is a great album to play on your next road trip.