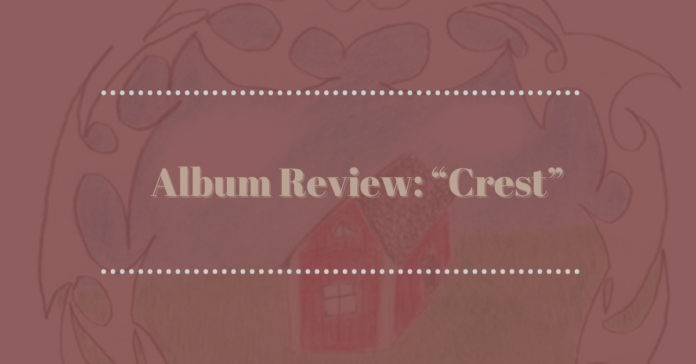 Early in 2022, internet-famous Swedish artists Bladee and Ecco2k released their collaborative album “Crest.” The two are part of the collective group Drain Gang, whose fanbase is known to indulge in irony through the use of memes, fashion, and their taste for music that pokes fun at old and new trends alike. The artists’ use of over-the-top autotune synthesizers that sound straight from an early 2000’s rave and cheesy lyrics are staples of their past work, but just like their previous releases, there’s something sincere at the core of their music.

Since its release, “Crest” has showcased  an even more compelling argument that Bladee and Ecco2k are serious artists who can touch on the profound. The album is filled with all sorts of themes and symbols ranging from religious iconography to the yearning for something greater than and beyond reality.

In the track “Faust,” Ecco sings “I want to live in heaven/I wanna reach closer to you.” There’s something special about hearing this type of sentiment from an artist like Ecco2k. It signals an unmistakable desire for afterlife or perhaps spiritual connection. This sort of transcendent subject matter lends itself quite well to the dancey and poppy rave vibe given by the album. People often speak about the liberating atmosphere at the group’s concerts and how the dissipation of inhibitions can elevate the crowd to new heights, a transcendence in its own right.

The two most popular tracks on the album are “The Flag is Raised” and “Girls Just Want to Have Fun.” Both of which show how the artists have matured their songwriting and how they’ve maintained their knacks for making impossibly catchy melodies. “The Flag is Raised” references tales and principles from Catholicism and Buddhism alike to touch on different virtues and ways for the narrator to handle his suffering. Not something most would expect to hear over an electronic synth-pop beat — but it works.

“Girls Just Want to Have Fun” is an obvious homage to Cyndi Lauper’s famous hit from the 80’s, an anthem about the femme condition. The two boys, Bladee and Ecco2k, softly harmonize together over this track using falsetto voices, leaning into something androgynous and cherubic. Again, this song invokes a transcendent feeling for the listener and insinuates either the search or arrival to a place beyond.

The album isn’t flawless though. There aren’t many surprises when it comes to the production of the album. Each track feels like it uses the same types of sounds . . . which are good sounds, but variety seems underused here. Still, it’s definitely worth a listen.

Since its release, “Crest” has proven to be one of the more developed and powerful representations of who Bladee and Ecco2k are as musicians and has established the precedent that electronic pop artists and rappers alike are more than capable of touching on profound ideas.