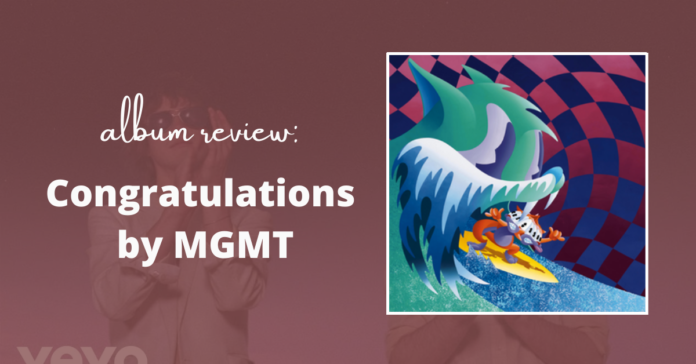 Two years ago marked the decade anniversary for MGMT’s sophomore album Congratulations. Before the release of this album, the duo Andrew Vanwyngarden and Ben Goldwasser had just found themselves in the mainstream of pop music with massive hits from their first album with tracks like Electric Feel, Time to Pretend, and Kids. But the artistic direction they took after finding this fame left both critics and fans surprised and confused.

MGMT decided to make music more in-line with what they wanted to make. After all, the musicians are known to have confessed that the songs they were famous for they wrote in a tongue-cheek way to poke fun at typical cliches in pop music. Ironically, their ironic songwriting resonated with a lot of people due to its catchy hooks and bright production.

So, fans of their big hits were taken aback when checking out the band’s second album which from head to toe is filled with far out music reminiscent of genres from the 60’s and drenched in psychedelia. But time has shown that many people sincerely appreciated Congratulations and the musical depth it has to offer.

It’s hard to find the right words to accurately describe the style and aesthetic of the album, but it’s like a psychedelic surf-rock album that nods its head to the sounds found from the Beach Boys and the Rolling Stones.

The album opens up with “It’s Working,” a very surfy track about drugs and Vanwyngarden’s lifestyle soon after finding fame as a young touring musician. The songwriting is impeccable and in the fashion of MGMT’s music, it holds many surprises like varying drum beats and rhythm sections, key changes, dissonant but satisfying harmonies, and lyrics that make you feel something.

From there, the abum takes a thematic dive into what it means to be a musician and to inquire about how other artists (perhaps ones MGMT look up to) have dealt with fame. There’s tracks about Dan Treacy from Television Personalities, Brian Eno, and even an instrumental titled “Lady Dada’s Nightmare,” which is imaginably about Lady Gaga.

MGMT seemingly became famous by accident, by some cosmic joke, and found themselves signed to a major label and touring the biggest music festivals and venues in the world. They were disoriented and exhausted from touring. When the pressure of releasing a new album came from Columbia Records, they chose to write music true to who they were at the time rather than catering to what got them famous in the first place. MGMT took this path without jeopardizing the quality of music. Even twelve years later and it’s impossible not to find something new, exciting, and fun when listening to Congratulations.