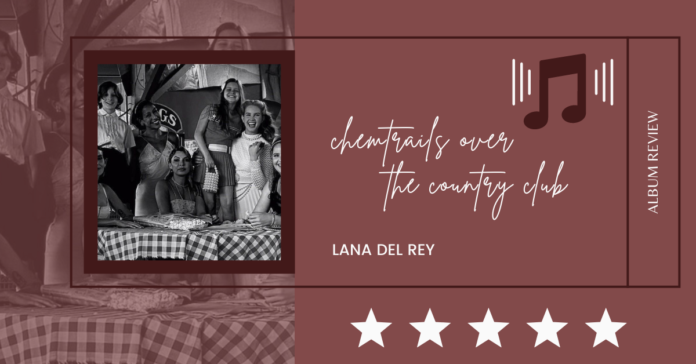 There’s plenty of songs and albums out there about fame, glory or finding love. Songs of hope or inspiration. That’s not what we’re talking about here, though. Lana Del Rey’s new album “Chemtrails Over the Country Club” reminisces over the simplicity and stability she lost when she found success in her musical career.

The song, “White Dress,” opens the album with a nostalgic look into Del Rey’s days working as a waitress. The song describes a time before Del Rey’s career took off, when her life was more innocent and less complicated. A time when she was unaware of the corporate struggles for control in the music industry.

Carrying on with the sting of nostalgia and longing, the album moves into the title track “Chemtrails Over the Country Club,” a song that maintains the idea of blissful ignorance – enjoying relaxing at a country club while ominous chemicals stripe the sky. Although the next tracks move her to present times, they still carry the sentiment that being successful in her music may not have entirely been worth it. Some of the following songs also touch on the idea of not wanting fame to change who she is for the worse.

The biggest criticism this album received happened before the music was even released. Many believed the black and white cover hid the diverse ethnicities of the people on it, and the way Del Rey responded to these concerns generally made matters worse. Taking the music on its own though, there’s not much to take issue with. While some of the songs could seem fairly generic to the passive listener, those who want to pick apart the tunes will find a lot to discover.

As always, Del Rey’s voice in“Chemtrails Over the Country Club” is beautiful and the lyrics thoughtful and interesting. The album’s release may not have gone off without a hitch, but many will still find the music well worth a listen.