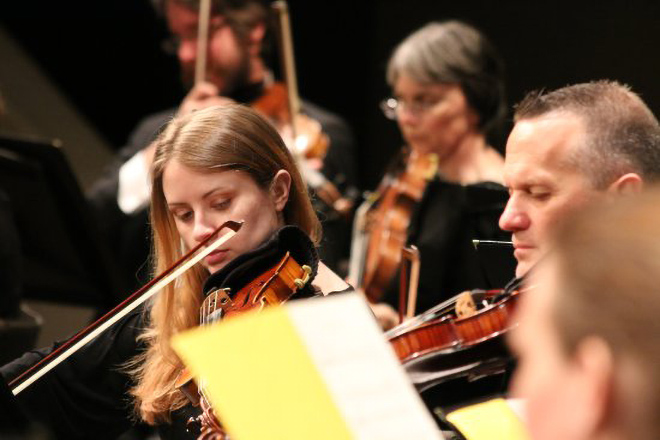 In a world filled with Internet noise, it can be sheer bliss to step back, take a deep breath, and listen to music from a bygone era. Treat yourself, and join The Brazos Valley Symphony Orchestra and director Marcelo Bussiki as they celebrate Baroque composers Antonio Vivaldi and Johann S. Bach on Sunday, November 10, at 5 p.m. at Rudder Theatre.

Vivaldi’s famous “Four Seasons” is a breathtaking, vibrant interpretation of each season, and

Chaparro is just the violinist to make it come alive. A featured artist in films and documentaries as well as in performances around the world, Javier Chaparro plays from the heart. His music echoes his Peruvian heritage and culture as he brings the traditional beauty of classical music alive with robust sounds. With Chaparro, no note is lost: he plays each musical measure with passion.

Similarly, Penny Zent, a recognized flutist, has toured internationally and has been with the BVSO since 1984. She is currently serving as Vice President of the National Flute Association.

From wistful to joyful, Zent’s flute pours forth a range of emotions as it becomes an extension of herself, breathing life into the air with the sound of music. Only an accomplished flutist could carry off Bach’s Suite No. 2, the final movement of which is considered one of the most difficult and exciting works for the flute.

Don’t miss this stunning evening of classical music from Bryan College Station’s very own orchestra, bringing the language of music to life in a new way each season. This concert is sponsored by the Ham Family Trust.

For more information and to purchase tickets, visit bit.ly/BVSO10Nov.